After a late-night arrival, the Delegation woke up eager and excited to explore the kookiest city on our itinerary: Berlin. With an appealing mix of old and new, walls painted with graffiti, and dozens upon dozens of vegan cafes, Berlin felt like the cool new kid on the block.

We traipsed our way through the newly-designed Potsdamer Platz (once the world’s largest building construction site, after the wreckage caused by World War II), before arriving at our first meeting with the prestigious German Council for Sustainable Development. Members of the Council are elected by the Chancellor of Germany, Angela Merkel, to advise the government on its sustainable development policy. It also has a further task of creating and sustaining public dialogue around sustainability issues, whether they concern the environment or in more niche industries like finance. Dr. Veronica Tomei, with whom we met, started the presentation by outlining the Council’s projects, before turning the discussion on the sorts of sustainability initiatives that take place in New Zealand. Needless to say, it was an incredibly engaging meeting! 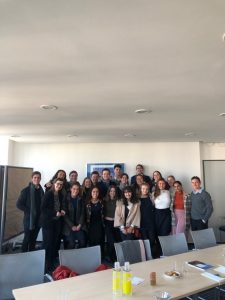 Once the meeting finished, the Delegation caught the S-Bahn to the East Side Gallery. There was an amazing array of murals on the remnants of the Berlin Wall, from quirky expressions of abstract art, to more serious and somber visuals on the importance of human rights. After the Delegates (and Director(s)) were satisfied with their potential Instagram shots, we mentally resolved to trek all the way to Alexanderplatz – an open square in Central Berlin, directly beneath the TV Tower – before ending the evening at a traditional German pub (apologies to our vegetarian delegates!). 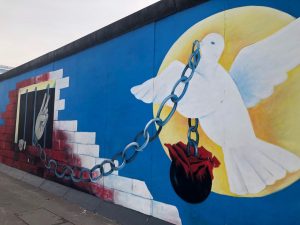 The next morning was considerably more sedated, given our pitstop at Sachsenhausen – a former Nazi concentration camp, used primarily to imprison prisoners-of-war during World War II. While it was incredibly harrowing to walk the footsteps of those before us, and to witness the atrocities that had been committed on those grounds, it was also an empowering reminder to not let history repeat itself.

While the train ride back to Central Berlin was a quiet one, our mood did perk up during the afternoon’s Walking Tour. We explored the history behind the Brandenburg Gate, learnt that the Memorial to the Murdered Jews of Europe has no official meaning (leaving it open to interpretation), and walked over an unassuming parking lot – which turned out to be (spoiler alert) Hitler’s Bunker. A massive shout-out to our lovely Tour Guide, India! 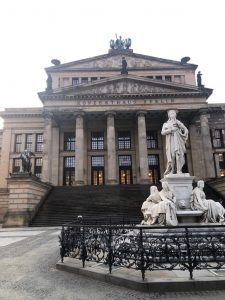 Our visit to Berlin was quickly coming to a close, much to the dislike of both Delegates and Directors. Friday morning began with a Tour of the Reichstag, the historic meeting place of the Bundestag (the German Parliament). A fun fact that we learnt was that the newly-constructed glass dome at the top of the Reichstag was meant to symbolise the transparency of the German government! 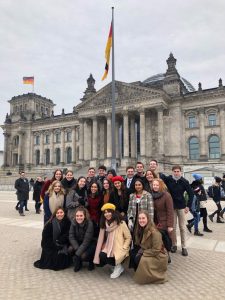 We then hiked our way to Checkpoint Charlie for our last meeting in the city, with the United Nations High Commissioner for Refugees. Chris Melzer, the Spokesperson for the Organisation, was incredibly engaging and passionate about the work that he did. The Delegates thoroughly enjoyed discussing the contentious issues of the refugee crisis, including the threat of human trafficking and the assimilation of refugees into Western society. Chris also talked about his experience as a teenager growing up in the Cold War environment. He lived in East Berlin and witnessed the ideological fall of the Berlin Wall in 1989 – a heartening reminder to both Delegates and Directors of the freedoms we have today! 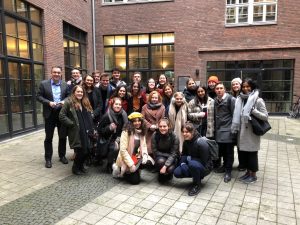 The day ended early, given our early morning flight to Vienna (hello, 3am!). Catch us in Mozart’s city next!