Our adventures in London continued on Wednesday morning with a visit to the United Nations Global Compact, held at their seriously cool office space in an Islington art gallery. There, the Delegation learnt all about the work the Compact is doing educating the public and the private sector on the SDGs. The highlight of the meeting was undoubtedly the interactive component, where the Delegation were divided into groups, each of whom were allocated an industry, (eg, financial services, retail, oil and gas), and a level of engagement with the SDGs (eg, advocates for the goals, indifferent towards them, or interested in knowing more about them). The teams were then tasked with responding to a range of scenarios from the perspective of their specific stakeholder.

UN Global Compact’s key multi-year strategic goal is driving business awareness and action in achieving the SDGs by 2030. The gallery the Compact so kindly hosted our Delegation was a dynamic, open-plan space. The interactive scenario activity, which tasked us with problem solving on the spot, was a refreshing way to mix up how most of our meetings had previously run. – Florence Ferguson (Wellington)

Following this, the Delegation tubed across town for our second meeting of the day with the New Zealand High Commission, at the beautiful New Zealand House near Trafalgar Square. The Delegation enjoyed hearing from the Deputy High Commissioner and the team, who were all riding a high, fresh off a successful visit from the Prime Minister. Other topics of discussion included Brexit, the Commonwealth, and the continued importance of the New Zealand-United Kingdom bilateral relationship. Following the meeting, the Delegation were fortunate enough to get to check out the breathtaking view over London from the roof of the House – the perfect spot for yet another Instagram or profile picture update (as if we haven’t had enough of those already!). 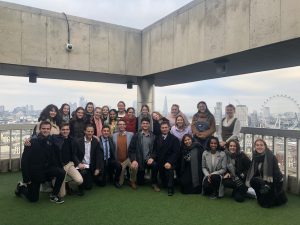 Having just hosted our Prime Minister in an effort to secure a post-Brexit agreement with the UK, it was all hands on deck at the High Commission – and Brexit was certainly the hot topic of the meeting!  We were also fortunate enough to snap a Delegation pic at the top of the High Commission, which had a stunning panoramic view of the city of London. – Isabella Sheild (Auckland)

Our final full day in London kicked off on a high, with the Delegation’s meeting with Advocates for International Development (A4ID). A4ID secured the Thames-side offices of Magic Circle law firm, Norton Rose Fulbright, for this engagement with two members of the team – including a New Zealander from none other than Hamilton! The Delegation loved hearing about the work A4ID does in partnering major legal firms with worthy NGOs operating in the human rights, gender equality, and education fields. 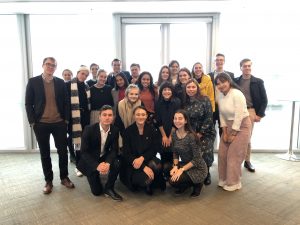 A4ID provided the Delegation with an insight of the importance of multi-stakeholder cooperation in devising inclusive policies – safeguarding human rights for the realisation of the SDGs. As many of us plan to study law, or are otherwise interested in how large charities can affect grass-roots development, this was both an intriguing and captivating meeting. – Maddison-Rose Ryan and Vivien Whyte (Auckland)

From Norton Rose, the Delegation couldn’t pass up an opportunity for a photo op with Tower Bridge, before heading off for a delicious lunch at Borough Market, where sights, smells and free samplers were aplenty! The Delegation then made their way along the Thames to Shakespeare’s Globe Theatre, before exploring the Tate Modern and / or St Paul’s Cathedral.

Next on the agenda was our much-anticipated meeting with the Royal Institute of International Affairs, aka: Chatham House, aka: one of the most high-powered think tanks in the world! The Delegation received a warm welcome from the Chatham House team, who provided TED Talk-style presentations on a number of the diverse work steams the House is involved in, followed by another interactive activity. Of particular interest to the Delegation was the presentation on the reduction of meat consumption, and hearing the House’s views on the viability of plant-based and lab-cultured meat alternatives, which are purportedly indistinguishable from their genuine counterparts. There was a lot of discussion around the ‘Impossible Burger’ (as featured on Air New Zealand business class), which the Delegation all hope to put to the taste test one day soon. 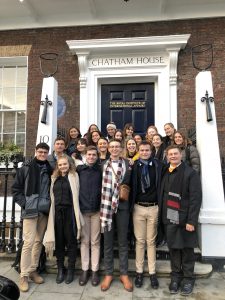 Catch you in Paris next!