It’s been a pretty busy two days for the Delegation.

After a leisurely wake up call on Monday morning to make up for the flight delays (and the reaching of New York at midnight), we headed out to our first stop: the 9/11 Memorial Museum. The site included the empty blocks where the Twin Towers stood, which was a harrowing experience to say the least. Inside the Museum, you really got a picture of the sheer scale of the incident, the remnants from the buildings, and the various items that belonged to both victims and survivors was sobering, in the words of another Delegate.

“It was a beautiful and  tasteful tribute to what happened.” – Caitlin Hancy (Auckland)

”The scale of the memorial communicated not only the numerically mortifying loss of life, but the desolating effect the attack has had on the public psyche of the American people and New Yorkers in particular.” – Henry Ewan (Auckland)

After a quick lunch, the Delegation ran to the Rockefeller Center to watch the sun go down from the top. Seeing New York’s buildings against the backdrop of pinks, oranges, and reds made for many a good ‘gram’, as the Delegates soon found. In fact, a certain someone was overheard saying, “this might even be in the 300s range” (when referring to potential likes). 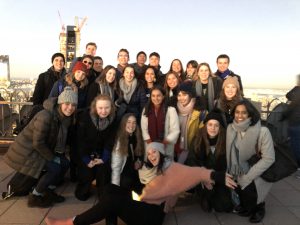 A hearty and delicious dinner followed at The Little Beet before the Delegation headed down to get their first glimpse of Times Square. If there was any doubt in the Delegates’ minds that we weren’t in New York, it was quickly eradicated when surrounded by the lights, dressed up Statues of Liberty, and the iconic red steps. 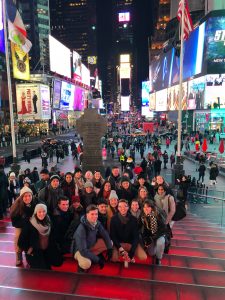 Day Two started off with a tour of the United Nations Headquarters – something that many Delegates looked forward to, since most of them foresaw jobs in diplomacy and international relations. The 45-minute tour included a history of the United Nations, an overview of the Universal Declaration of Human Rights and the Sustainable Development Goals, and the opportunity for Delegates to view the Security Council, the Economic and Social Council, and the General Assembly Halls. 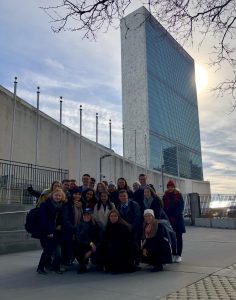 “It was incredible to see the actual UN and to see what the people actually do (and how many languages the Tour Guides spoke!) – Ella Flavell (Wellington)

Though Chipotle was busy (and shelved for another day), the Delegates still had a great time eating in City Hall Park, where squirrels were aplenty. Surprisingly, the day wasn’t too cold; otherwise, crossing Brooklyn Bridge might not have been as easy as it was. With a stunning view of the New York skyline behind the old sandstone from the Bridge itself, the walk was an experience enjoyed by both Delegates and Directors. 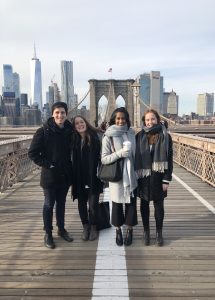 Since we didn’t have much time to spend in Brooklyn before dinner, the Delegation decided to stick around in the ‘DUMBO’ area (Down Under Manhattan Bridge Overpass). Doesn’t sound familiar? It’s the place where you can get amazing shots of the Manhattan Bridge, nestled perfectly between two picturesque red-brick buildings. After an entirely too-American dinner of pizza, burgers, and fries at Planet Hollywood, the Delegation split off into either Broadway or Ice Hockey for the evening. They went to a range of shows, including Hamilton, Chicago, The Book of Mormon, Pretty Woman, and Beautiful, and the Ice Hockey game was between the New York Rangers and South Carolina Hurricanes at Madison Square Gardens. Needless to say, it seems like everyone has cemented their plans to move to New York!

UN Youth Auckland is looking for motivated and diligent volunteers to take on positions on the High School Ambassadors Committee in 2021. In particular, the committee should have a focus on community engagement and outreach and approach schools that do not have an established UN Youth presence. Relationships with these schools need to be maintained […]