Science is all around us, it literally makes up who we are in a sense, and I think that’s what is so amazing about it – it empowers you with the knowledge, and skills to better not only your own lives, but also that of the rest of society. That’s why it sucks to see that there are still massive barriers against women in STEM careers. So many girls take STEM related subjects at school and university, so it’s easy to think that there isn’t an issue at all. However, the in-built sexism can be found at all levels in STEM careers. Women deserve the equal chance to grasp the awesome opportunity that Science, and a STEM career provides.

I decided to study Science, especially Chemistry because it empowers me to create the change that I want to see in the world. Learning chemistry isn’t just about memorising atoms or formulas, but seeing how the things you learn make up the foundation for everything that you see around you. I find this so awesome, because understanding Chemistry allows me to have a deeper understanding of Climate Change and sustainability issues. I’m able to understand the ‘why’ behind the issues that we face today, and use this to hopefully one day influence new technology and policies to make our world a better place.

There’s a beauty in researching, finding those pieces of information that will be used in the future, in finding objective truths in our world, in finding ways to understand it better. At my primary school, we had random facts day, where everyone had to come into class with a strange quirky truth about the world we lived in, one of the best ones told was “Mantis shrimp limbs can move so fast that the water around them boils.” This was the start of my obsession with Mantis Shrimp, and my love of science.

Through scientific communication with youth, we stimulate the next generation of minds to take us forward into the future, as well as stepping forward ourselves. As the world becomes more connected, by the internet, by migration, some cultures are seen to be very different, but what scientists can see is the commonality of the scientific method, try once, try again, and again all under the same conditions and have you got a trend? We find connection through the knowledge we have; though sometimes in different languages, and the love of knowledge that we share. 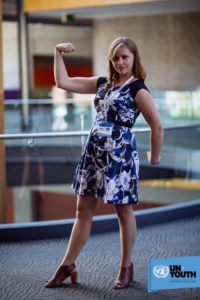 Engineering as a career appealed to me partly because I love science and creative discovery, but also because it is a skill that can be applied to help people in so many different ways. The 2015 magnitude 7.8 earthquake in Nepal killed almost 9,000 people, while Japan – the global center of earthquake research – frequently has high magnitude earthquakes with low or non-existent death tolls. The quality of physical infrastructure and the disaster response systems is so often the difference between life and death during disasters, so I can feel proud that the work I do in the field of earthquake engineering contributes to a safer community.

I am also proud to be a woman in a STEM field. Representation is improving so much now days (over a quarter of new engineering students are women!), but there is most definitely still work to be done and stereotypes to be broken.